Are you from the EU regions?

Taiwan guavas greenlighted for US market 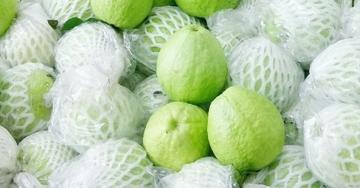 Taiwan-cultivated guavas are set to go on sale in the U.S. after the agricultural product was greenlighted for import, spotlighting government efforts to open up new markets for local farmers.
The decision comes on the heels of an operational work plan signed by the Cabinet-level Council of Agriculture and U.S. Animal and Plant Health Inspection Service under the Department of Agriculture Oct. 24 in Washington. The agreement states Taiwan suppliers must place bags over guava fruits three weeks after they bloom, followed by a 17-day treatment reducing the warehouse temperature to maximum 1 C to eliminate the possibility of fruit fly or larvae infestation.
At a news conference held in the southern city of Tainan announcing shipment of the first batch Dec. 27, COA Vice Minister Chen Jun-ji said the achievement is a great moment for the country’s guava farmers. Taiwan is the only nation in Asia to enjoy access to the U.S. market, he added.
Taiwan guavas are prized around the world for their consistent shape and size, as well as unforgettable taste, Chen said, adding that the fruit is certain to prove a hit in the U.S. thanks to a promotion run by the COA in cooperation with Taipei City-based Taiwan External Trade Development Council (TAITRA).
The fruit is already being exported to countries and territories such as Bahrain, Brunei, Canada, China, Indonesia, Macao, Malaysia, the Netherlands and United Arab Emirates, the COA said.
Latest statistics from Customs Administration under the Ministry of Finance reveal that exports of Taiwan-produced guavas totaled 4,687 metric tons from January to November this year (2019), with a total value of US$6.77 million. The largest destination was Canada, accounting for 57 percent of total exports.
Source: TaiwanToday
Kai Chiu (kai@taitra.org.tw)